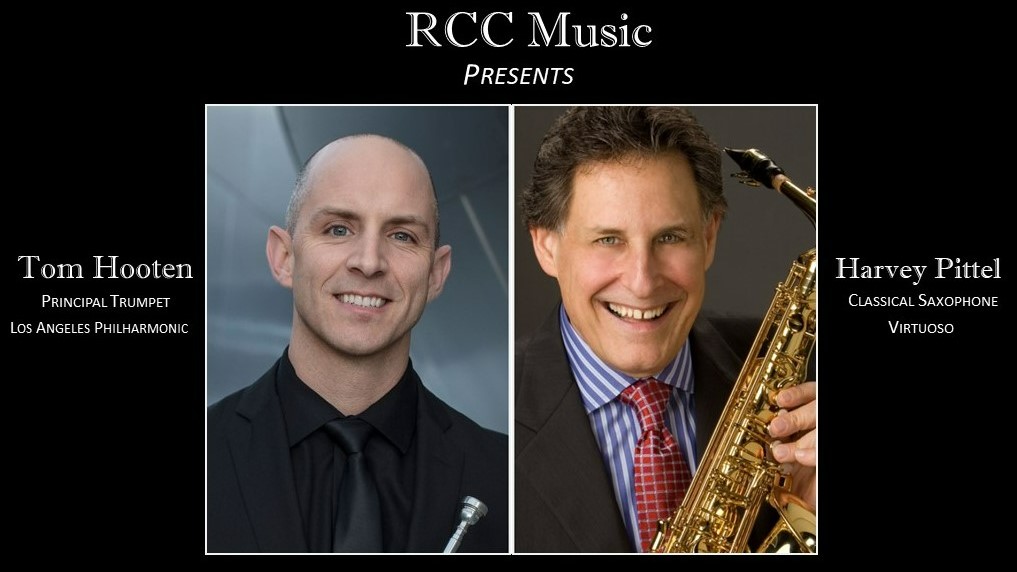 Tom Hooten, principal trumpet of the Los Angeles Philharmonic, will perform a recital at 11 am and at 4 pm the RCC Concert Band and Wind Ensemble will be joined by classical saxophone virtuoso Harvey Pittel.

Hooten, one of the world’s most prominent classical trumpeters, can be heard on numerous recordings with the Los Angeles Philharmonic, the Atlanta Symphony Orchestra, and the National Brass Ensemble. He began his career as a trumpet/cornet in “The President’s Own” United States Marine Band in Washington, D.C., where he was often a featured soloist. He went on to join the Indianapolis Symphony, the Atlanta Symphony Orchestra, and today is the principal trumpet in the LA Philharmonic.

The afternoon session features the RCC Concert Band and Wind Ensemble performing their last spring concert featuring music of Norman Dello Joio, Dimitri Shostakovich, and Paul Hindemith. The Wind Ensemble will be joined by Pittel in a performance of Wolfgang Gernot’s World Premier of Traveler, a concerto for soprano and alto saxophone.

Acknowledged as one of America’s foremost classical saxophonist, Pittel has popularized the concept of the saxophone in concert and has elevated his instrument to a new level of appreciation by lovers of fine music. Numerous recordings of his music are available on Amazon, iTunes and on Pittel’s multimedia web site harveypittel.com.

Both performances are open to the public. Tickets can be purchased online at rccboxoffice.com/rccmusic  The RCC Coil School for the Arts Concert Hall, 3890 University Avenue in Riverside.